Since its release in 2010, the Apple iPad has demonstrated its strength by dominating over 70% of the tablet computer market. During the fourth quarter of 2011 alone, Apple sold 15.4 million iPads.Most consumers use the iPad mainly for a combination of web surfing and online entertainment. In the business and commercial environment, the iPad is a partial replacement for a laptop, offering portability and ease of use. Of course, for those of us in the learning business, the iPad also offers a brand new and exciting delivery platform for eLearning.

I have received more and more requests from Fredrickson’s clients who are interested in delivering eLearning modules on the iPad. And we quickly have to come to terms with the major issue with the iPad as it relates to eLearning…you cannot run your shiny Flash-based courses on iPad. See my previous blog entries for more on this.

Apple’s decision not to support Flash player leaves us with only a couple of solutions, both of which have many pros and cons.

The first option is to develop the courses as “apps” that are native to iPad, and then push them to the learner’s iPad through the App Store. This process is usually expensive, time consuming, and it may bring up security, content rights, and confidentiality issues.

The second option is to develop the courses using HTML5 and CSS, and then deliver the courses online, either through a secure URL or an LMS. Fortunately, there are some rapid development tools on the market that offer the capability of converting the existing Flash courses to HTML5 format. The best examples are the just-released Articulate Storyline and Adobe Converter, also known as HTML5 Converter for Adobe Captivate 5.5.

So how well do these rapid development tools work when it comes to producing HTML5 content? I conducted a brief test run on both tools, focusing on the HTML conversion, web delivery, and LMS compatibility. For this testing, I developed two short eLearning courses with Storyline and Captivate 5.5. Both courses contained the same number of slides, visual assets, and interactions. Here are my findings:

I’ll start with an interesting observation. Apparently, both conversion tools only work in Windows. Even though the Mac user can run them on a virtual machine, it is a complicated process. I hope that a Mac version will available in the near future!

Overall, I would say it is slightly easier to convert the course using Storyline. I can publish the project as an HTML5 package right in the “Publish Settings” window.

Unlike Storyline, Adobe Converter is a standalone application. First I needed to publish my Captivate project in Web/Flash format. Then I had to import the published SWF files into Adobe Converter. Not a terribly arduous process, but it does take a little time.

Storyline did a great job in converting the whole course. Everything that I put in the course translated well to HTML5. There are no misalignments or cut-offs, and the buttons and interactions function very well. Storyline maintains the same playback bar in the HTML5 package, which provides the same user experience for the learners.

Adobe Converter takes a different approach by wrapping the converted course with a pre-defined framework. Its interface is very different from the Flash output. Given the complexity of Captivate 5.5, it is reasonable that not everything can be converted to HTML5. For example, the matching and hotspot interaction types in my test course did not convert at all. And there were some ActionScript errors showing up right after I launched the converter. Given that Adobe Converter is still in Beta evaluation, I believe these issues will be addressed in the final release, but anyone using Converter will need to carefully test their content to make sure.

The Storyline course loads faster, due to the small size of converted files. The package is also structured well. Basically, I can use the same package for all types of delivery, including Web/Flash-based platform, iPad, and LMS, by selecting different launch files in the package.

Storyline also introduces a specific tool to launch the course on the iPad. You need to download the “Articulate Player” app from Apple’s App Store. When launching the course, the player will remove all the web interfaces. It also offers the option to “Download the course to my iPad,” a feature which allows users to access the course even when they don’t have an active data connection. This is a brilliant idea because not all iPad users subscribe to a wireless provider’s data package.

In comparison with the package produced by Storyline, the Adobe Converter package loads much slower. I believe this may be due to the complicated file structure and considerably larger file size. The converted package can also only be used for mobile delivery.

Storyline supports all major LMS protocols, including SCORM 1.2, 2004 and AICC. I tested it with SCORM1.2 on Moodle, an open source LMS. It worked great with this LMS, and reported my learning status successfully.

Adobe Converter only supports SCORM 1.2 at this point. It worked well with Moodle. All communication and status reporting happened as expected. The loading speed, however, was still a huge concern. The course loaded even slower using the LMS. This could be a huge issue for the users who have slow Internet connections.

Overall, Storyline did a much better job in converting the course to HTML5 package than Adobe Converter. However, I have to address the fact that Adobe Converter is still in beta evaluation, while Storyline is officially released as a commercial product. There still could be changes to Adobe Converter that will improve some aspects of the product.

With the advanced features in Captivate, such as customized variable control, ActionScript functions and Widgets, it will take time to develop a mechanism for converting them to HTML5. Also, please note that Storyline costs $1,400 for a license, while Adobe Captivate costs only about half of that. Adobe Converter is free right now in its beta form.

Adobe released the CS6 series of many of its products, like Dreamweaver, back in May, and these new releases include many features to enhance mobile compatibility. For example, Dreamweaver CS6 has added templates for developing native apps for iPad/iPhone. Captivate, however, was an exception for this CS6 upgrade. The latest version of Captivate is still CS5.5. There are some discussions online about the possible new features that could be included when Captivate CS6 is released. Given the success of Storyline, I hope Adobe will add similar features in this next version of Captivate. Watch the Fredcomm blog for more information.

Each product and publishing format, of course, has its own interface design. Just for the sake of comparison, here are screen shots of the same course content from each of the tools in different published formats: 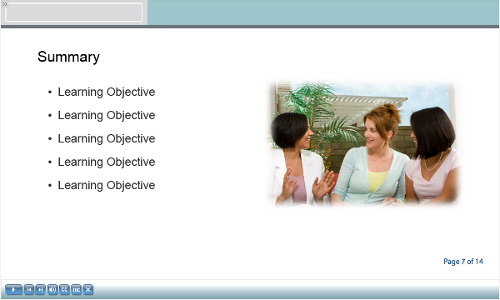 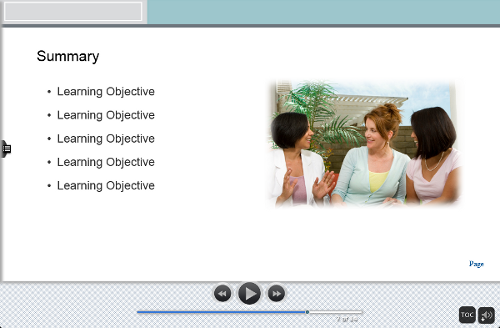 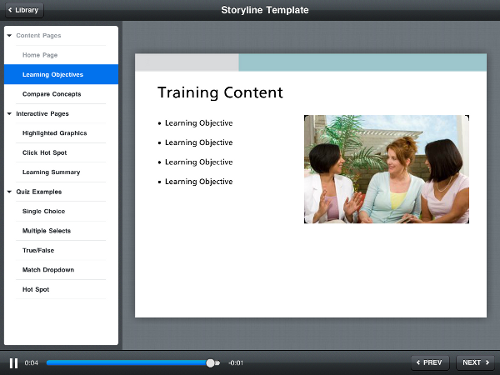 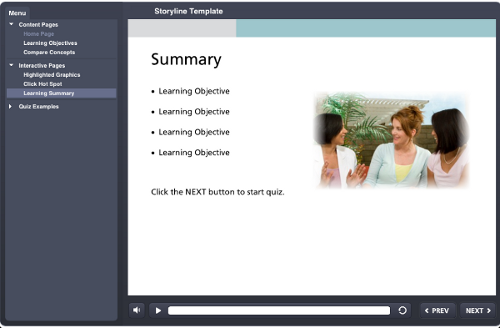 About the Author: Tony Tao

Tony has more than 12 years of experience in instructional design, learning theory, and web development. As an eLearning developer, he specializes in designing, authoring, and creating complex interactivity – and he is known for his imaginative and effective approaches to accessible eLearning.

Tony has an MS in Instructional Design and Training, including a Certificate in Design for eLearning. And he currently serves on the board of the Professional Association of Computer Training (PACT).